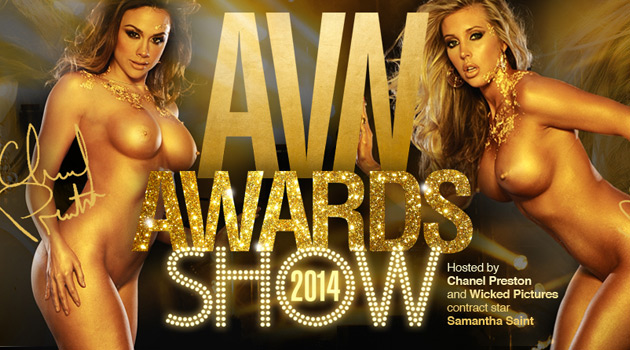 AVN Media Network, organizers of the annual AVN Awards, announced the launch of a Twitter-based casting call to find two new industry performers to serve as the coveted trophy girls during the 2014 AVN Awards. The awards take place at The Joint in Hard Rock Hotel & Casino Las Vegas on Saturday, January 18, 2014.

To be considered, female talent must tweet their sexiest photos to the official AVN Awards Twitter account, @AVNAwards, and include the hashtag #AVNTrophyGirls. To be eligible, all candidates must have entered the adult industry in 2013. Submissions will be accepted until midnight October 25th. Two winners will be selected soon after.

The ceremonial trophy girls serve as a highly visible and prestigious assignment for rising stars within the industry. The duo is on stage for the duration of the awards show and featured prominently on the show’s cable broadcast. Hundreds of new performers submitted entries last year in the hopes of being named trophy girls for the 2013 AVN Awards. Response was so overwhelming, three performers were eventually chosen: Bonnie Rotten, Rikki Six, and Teal Conrad.

“We were simply amazed by the enthusiasm with which our casting call was received last year; our trophy girls were beyond amazing and have gone on to become big stars themselves,” said AVN CEO Theo Sapoutzis. “I am certain this year’s trophy girls will also impress and go on to represent our industry proudly. It will, as always, be difficult to choose among so many beautiful and bright young women, but it’s a task we look forward to.”

The 31st annual AVN Awards Show will be hosted by Chanel Preston and Wicked Pictures contract star Samantha Saint. Dubbed “the Oscars of adult” by Entertainment Weekly, the must-attend, must-see event features the hottest stars from adult and mainstream pop culture. With a stylish red carpet pre-show and lavish star-studded ceremony, the AVN Awards celebrates outstanding achievements in the world of adult entertainment.

Fans interested in attending the 2014 AVN Award Show may purchase standard and Golden Tickets at https://avnawards.avn.com/tickets/.