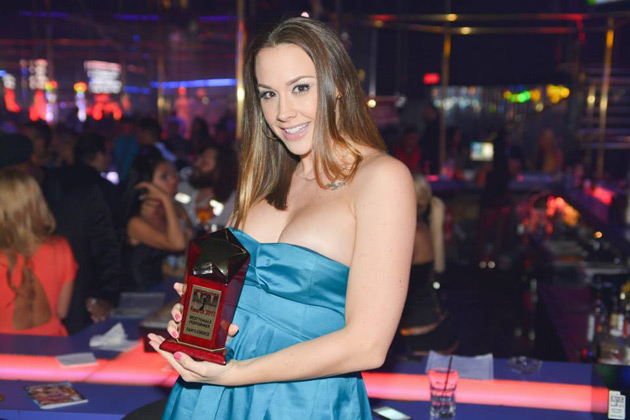 Stunning long-legged beauty and Penthouse Pet Chanel Preston was celebrated as Best Female Performer (Fan Choice) at the 21st Annual NightMoves Awards, which was held on Sunday October 13th in Tampa FL. The gorgeous brunette accepted her award in front of a packed audience at the Tampa Gold Club.

“My fans, reviewers, and the studios and directors who chose to make me a part of their projects are what makes this NightMoves award so very special,” says Chanel. “NightMoves is where I won my first-ever award, so it’s truly exciting to return to Tampa for another major honor. I look forward to continuing to entertain my fans in the very best way I can!”

Chanel Preston, who has received multiple accolades from 7 different adult awards competitions, started in her adopted home state of Hawaii as a dancer in gentlemen’s clubs. The statuesque stunner, who hosts the adult industry news show Inside Adult, was also recently named a host for the upcoming 2014 AVN Awards.

Congratulations to Chanel Preston on a well-deserved win, and be sure to check out her official website for an intimate and interactive look at the adult superstar.